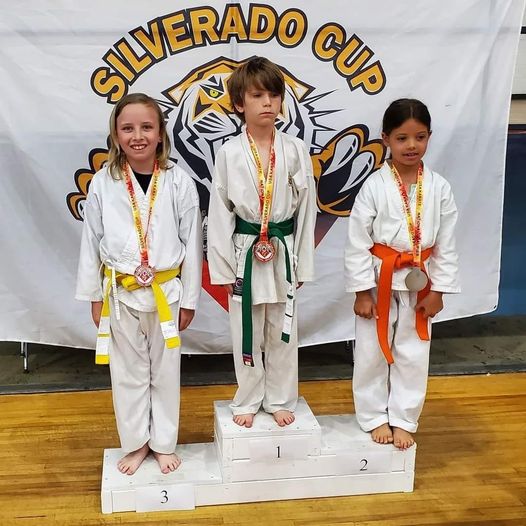 Our Kids Program is a great way to introduce children in Karate-do Jutsu. Ages 6 to 10

It’s important to teach kids life skills that they can carry with them for years to come. Karate Jutsu has many benefits for people of all ages, especially kids. Children who take Karate Jutsu can help them learn to handle bullying, teaches healthy fitness habits, encourages discipline to help develop good study habits, and teaches kids respect and non-violent conflict resolution.

What are the benefits of Karate for Kids?

Karate classes aren't designed to turn your child into a mini fighting machine. Instead, practices build self-confidence, respect and pride.

Of course, Karate give kids a chance to be active, which helps work off energy in hyper little ones or gets kids who tend to be sedentary up and moving. However, these ancient practices also teach your kids responsibility, bolster self-esteem, enhance concentration and develop respect for themselves and others.

Enroll in any form of Karate in which your child shows interest, as it's not so important what type of martial art he does, but that he does one. Anytime after age 6 is a good time for a kid to start Karate training as he has the motor skills to punch and kick.

The Centers for Disease Control and Prevention recommends children do an hour or more of physical activity daily; make it a combination of cardio, muscle-strengthening and bone-strengthening activities.

Karate helps him meet this goal. Warm-ups usually involve raising the heart rate, as do repeated series of punching and kicking drills. Some Karate programs encourage push-ups and other bodyweight strength-training moves, as well. If Karate replaces time in of the television, computer monitor or video game console, all the better.

Most Karate require you to show up in a clean uniform and a neatly tied belt. Your child will quickly learn to take pride in his appearance and keep these items well cared for. Any other equipment, such as sparring gear, is also his responsibility to care for and keep together.

He'll also learn responsibility for his actions. Only by learning forms, paying attention in class and focusing on proper punching and kicking techniques will he advance in belt status. Much of this responsibility carries over into other aspects of your child's life — grades and behavior often see remarkable improvement after a child takes up a martial art.

Kids in Karate are usually grouped together by belt level, not age or popularity. As a result, younger kids can readily participate with the big kids — if they put in the work.

Self-defense techniques, such as those taught in Karate, can give a shy child a bit more confidence in the school yard. He'll probably never use them, but knowing that he can defend himself if challenged makes him feel more in control.

Advancing in belt status and doing well in front of his peers at testing fosters a sense of pride, too. At many dojos, higher belt levels oversee and guide lower belts in their learning; therefore, being skilled enough to pass on knowledge is a huge boost to self-esteem.

In a Karate studio, it's about you, your teacher, your opponent and your body. There's no music, no videos and no machines to distract you. This helps a child concentrate on his actions and the task at hand.

In addition, Karate usually include complex movements, including forms, kicks and blocks, all with their own names that are often in foreign languages. Your child may find that memorizing and executing these skills doesn't come naturally, and he'll have to develop great concentration to recall them, especially at belt testing.

Respect is a major tenet of Karate practice. This respect covers the lineage of the martial art, your master, higher belts, your uniform and yourself. You wait quietly to receive a command; you bow to your teacher to demonstrate respect.

This respect for others originates in the development of personal self-confidence. Karate teaches kids that they don't have to prove themselves to other kids, but rather that they're complete in themselves.