8th Dan in Karate-do
Katsumi Niikura, Sensei. Born in 1943, raised near the Atsugi Military Base in Japan. At the age of 12, began studying Karate and Judo. Trained Karate under Kanken Toyama Sensei as an Uchi-deshi (live-in student/apprentice) and received his 3rd Dan in 1963. 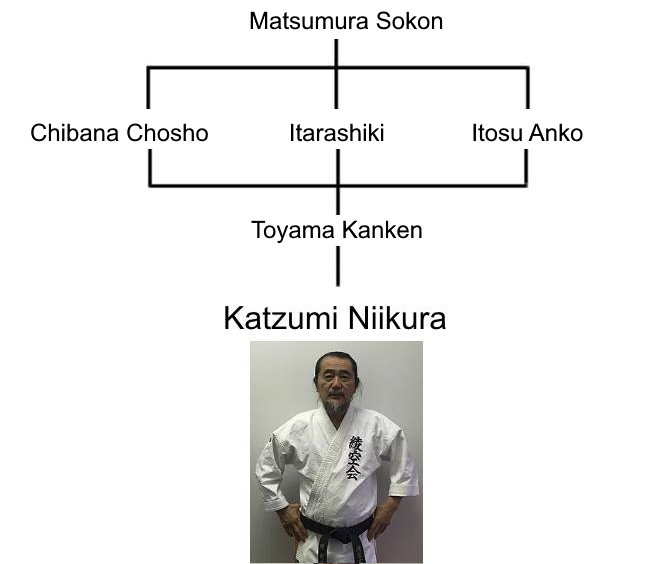 Niikura Sensei also practiced Aikido and Iaido. In 1973 he founded International Ryokukai Karate-do, a new karate style based on the best of what he had discovered through his study of a variety martial arts. In 1984 Niikura Sensei came to the USA and opened the honbu dojo of International Ryokukai in Sterling Heights, Michigan.
Niikura Sensei is well know Master of Ki
Throughout his life, Niikura Sensei worked intensively with Ki. Sensei Katsumi Niikura has been interested in power of breathing since his early childhood. While playing outdoors, he often wondered how fish managed to sometime stay immobile in the river despite of the flow of the current. Did it have something to do with how it breathed?
At the age of 12, Katsumi Niikura began studying martial arts. While helping his fellow students with their injuries, he discovered that some kind of energy was emanating from his hands. His effort to use Ki for healing came when his own daughter was diagnosed with brain cancer. He added traditional Ki energy healing techniques to her conventional medical treatment. When she recovered Sensei Katsumi Niikura continued to refine his skills to be able to help other people.
He believes that one of the benefits of Ki therapy is that it helps to restore energy of the body that was weakened after conventional medical procedures. It helps to alleviate the discomfort and enhance body’s natural resistance to illness.
Today, Sensei Katsumi Niikura teaches Ki, which is a tool for healing as well as a powerful medicine by itself.